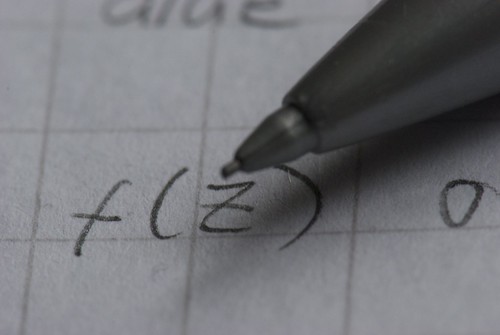 I think it will be simplest to begin with an example problem we might use my pattern to solve, then show how I would do it and explain all the parts.

Below is the full solution, with a few of the lengthier math calculations left as comments. Excuse the length, but I think seeing the whole picture first helps bring the techniques into focus.

I’ll comment first on the “data” classes — Vector and Orientation. I’m a big believer in the KISS principle when it comes to stateful classes. I try to keep as little logic in stateful classes as I can.

The only logic I usually include is calculated properties that provide “intrinsic” values (such as the length of a vector), and occasionally logic to enforce that the state stays valid. For example, I don’t enforce it here, but it would be reasonable for Orientation to force that Up and Forward are perpendicular (i.e. have a dot product of 0). In other words, if some state properties are inter-related, I will use code in that class to enforce the proper relation between the properties. I’ve seen inter-related properties that are not tightly coupled cause any number of debugging headaches.

Next we have RollAverageCalculator. You can see that it implements interface IRollAverageCalculator. This is really just for testing purposes, as mocking the function CalculateAverage requires either the virtual keyword on the function, or the class to implement some interface. I have chosen the latter option, though either is valid. Mainly I can’t stand the pain of worrying about constructors in mocked classes. And as I intend for my class to be essentially a function object, referring to it elsewhere as an interface with only one function feels like a more reasonable approximation than a concrete class with a real constructor and a virtual function.

AccelToRollCalculator performs the complicated math of determining the roll from an acceleration vector and an orientation. Because it has no dependencies, we can legitimately call it stateless. Even if CalculateRoll had side effects, those effects cannot alter AccelToRollCalculator. Accordingly, we can create one Singleton instance of the class and re-use it every time an IAccelToRollCalculator is wanted.

RollAverager is much like AccelToRollCalculator in structure. It has no dependencies and no state, so we can create a Singleton.

The existing function CalculateAverage is essentially a partial application of the above function:

Because we have seen that RollAverageCalculator is also stateless, we can again set up our dependency injection to provide it as a Singleton instance.

Unit testing these classes is very straightforward. The “leaf” classes will create the simple data objects required as arguments, and test outputs directly without using mocks. “Branch” classes will use mocks to guarantee the right relationships between their children (dependencies).

The WPF app I spent the last year creating required a large number of ViewModels, many of them dynamically created and having a one-to-one relationship with my models (as all ViewModels were bound to a visible View at the same time). The combination of this necessity and my use of the Reactive library for delivering updates to bound properties led to an additional innovation, what I’ll call “skinny” ViewModels. In essence, I started treating my dynamic ViewModels the same way I treat simple data classes: make them easy to instantiate and contain mostly data, not logic. SSRPs created the data stream sources for each ViewModel.

This all worked great, except for Buttons. ICommand — and specifically, MVVM Light’s implementation RelayCommand — basically expects you to provide a member function on the ViewModel or at least a lambda in order to specify behavior of a button click (as well as whether the button is enabled). So suddenly I was back in the land of mingling state and business logic. It really felt at odds with the simple property binding I was doing, like the data was trying to move in two directions.

When I found the answer, it felt obvious. Along with the streams of data which would set view model properties, I also pass in an Action and a Func<bool> for each button, to serve as the Execute and CanExecute callback, respectively. To handle dynamic buttons (where the meaning of the button or the enable state of the button changes), I turned once again to my trusty sidekick, the reactive library. Now a button can be described in terms of IObservable<Action> and IObservable<Func<<bool>>. Suddenly my button logic was nestled alongside my streaming property value logic, where it belonged. It seemed a little strange at first, but really it is just an application of the functional pattern of treating code as data. That is, the Action to perform when the button is clicked is just data (or state) that is passed into the stateful ViewModel object.

This pattern worked really well on my project, but I think it could be streamlined a little, albeit by deviating farther from "standard" C#. Instead of having a bunch of interfaces with only one function, I might use delegates instead. Ninject allows you to bind to delegates, and Moq allows you to mock them, so trying it out might not be too hard. It was simply too late in the project for me to attempt the switch. Then again, my overall trend is in a functional direction, so maybe the next time around I'll go straight for F# instead.