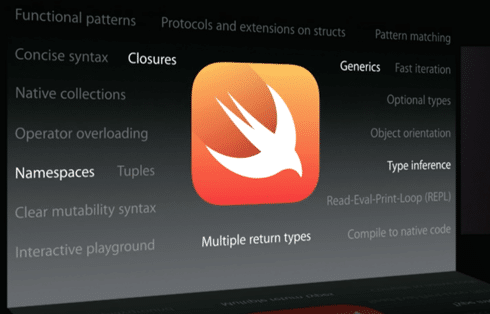 At Atomic Object’s Ann Arbor office, we made it a point to watch the 2014 WWDC keynotes, and it’s not an exaggeration to say our jaws were on the floor when Swift was announced. With Swift, Apple is moving forward with a much more modern programming language, and I am excited to get in on the ground floor and start developing with it.

In this blog post, I will highlight a few language features in Swift that will make developers’ lives easier.

When a new candidate for a developer position applies at Atomic Object, we give them a Getting To Know You (GTKY) document to fill out. The document asks a number of general questions, technical and otherwise, including, “What is your favorite language, and what would you do to improve it?” This question generates a surprising number of fails, one in particular was when a developer chose Objective-C as their favorite language and could not think of a single improvement to it!

This answer generated a lot of discussion and made me think about issues I have with Objective-C. To name a few:

So, I was delighted when Apple announced Swift and language details came to light. I will touch on a few here that address many of my complaints with Objective-C. I strongly recommend developers to download the Swift programming Language book and take a look at the Xcode 6 beta.

This is a huge one for me. Beyond the annoyance of having to (unsafely) cast instances of type id to the actual type, it’s very easy to make a mistake and send a signal to an id that the actual object does not respond to. Always checking respondsToSelector is very tedious. One solution Swift gives us is the var keyword:

Note that you can also explicitly set the type, as in the anotherDouble case. Types can be inferred for constant values using let in the same manner as var.

Objective-C has a nice syntax for easy collection enumeration:

That is a nice bit of syntactic sugar, but the problem is that very often in real-world programming, I need an index variable alongside the object instance from the collection.

Swift gives us a lot of useful collection enumerators, but I’m especially happy that they provided a global enumerate() method that returns a tuple for each item in the array composted of the index and value for the item.

In the job I had before joining Atomic, I was primarily working in C++, and I often found myself writing methods whose output was multiple values. I struggled with the decision to pass in multiple ‘output’ arguments by reference, use pair, or wrap the return values in a struct or class.

In Swift, there is a built in mechanism for what amounts to returning a tuple with an arbitrary number of labeled data members.

Swift also supports declaring a number of vars and getting the return value into each explicitly:

In Swift, classes have properties (similar to Objective-C). There is a mechanism for declaring setters and getters, but if the type of the property is simple and needs to computation, but you want to observe when it is accessed, there are two built in methods to override- willSet and didSet.

REPL stands for “read-evaluate-print-loop,” and I think of it as a sandbox to for testing out code. You can type code into the REPL as if you’re in an IDE or your favorite text editor, and it will be compiled/interpreted and run in real time- allowing you to see the output right away. This is a great feature for a developer trying to learn a new language. I’ve been using it to learn Swift.

To use the Swift REPL:

What Does the Future Hold?

I strongly believe that, in iOS 8 and beyond, Swift will grow to become the dominant language in iOS development. That said, Apple has assured us that the runtime will remain binary compatible: our Objective-C apps will continue to work. It is also clear that Swift syntax and semantics will change post-iOS-8. Apple told us that they will not guarantee source compatibility, but will provide code converters. While the thought of running a converter on production code scares me a little, I think the time to move to Swift will come sooner (iOS 8-9 timeframe) rather than later.