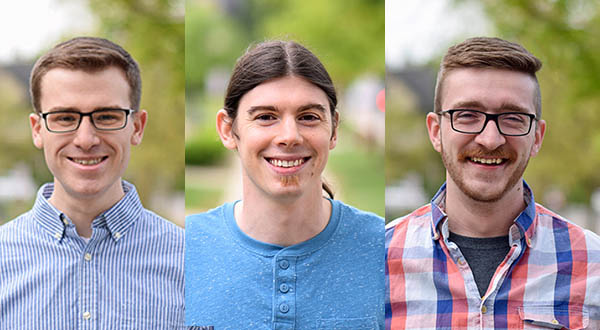 After the Grand Rapids office’s successful launch of the Accelerator Program, an accelerated professional development program for newly-graduated developers, we launched our own program in Ann Arbor. This spring, Cell Alpha (the first cohort of the Ann Arbor Atomic Accelerator) joined the office. I asked each of them to tell me a little about themselves and discuss their first few weeks on board. He graduated from Oakland University this year with a bachelor’s degree in computer science. Engineering is a family profession for Jarek’s family, but he knew he caught the software bug when he attended his first hackathon in college. He went on to help run Oakland University’s GrizzHacks and to work for Major League Hacking, where he helped organize and run student hackathons across the country. Learn more by reading Jarek’s bio.

“Anything that happens within Atomic is completely available to everyone—from time-tracking to board meetings. My favorite part about working here is being surrounded by so many intelligent and motivated people. Every day, I’m amazed by how much everybody brings to Atomic, and I feel like I come away as a better developer and with more knowledge.” Since joining Atomic, Josiah has been working on a web application for a debt-management nonprofit organization.

Josiah graduated from Grand Valley State University with a bachelor’s degree in computer science. Outside of class, he repaired technology for the university and served as a developer for the GVSU Mobile Applications and Services Laboratory. The Grand Rapids transplant likes tinkering with old gadgets, listening to new podcasts, and taking walks around Ann Arbor.

“After joining my project, I was surprised at the amount of feedback from clients. Teams at Atomic put in effort to keep open lines of communication.” After his on-boarding, Kory joined a team of Atoms re-designing a client’s large website.

Kory earned a double B.F.A. in animation and game development from Savannah College of Art and Design before taking on a graduate program in computer science at California State University Northridge—which he’ll complete this year. He says his interdisciplinary background allows him to visualize problems and provide novel solutions.

“Going on Pair Lunches is my favorite thing about working at Atomic so far. I’ve never heard of a company doing something like that. I know some workplaces provide food—or occasionally a whole group will go out for lunch after a successful release. But pair lunches allow you to get to know your coworkers more than you probably would at a group lunch.”

Want to do more with your first years out of college?

Learn about the Accelerator Program and email a2-accelerator [at] atomicobject.com.