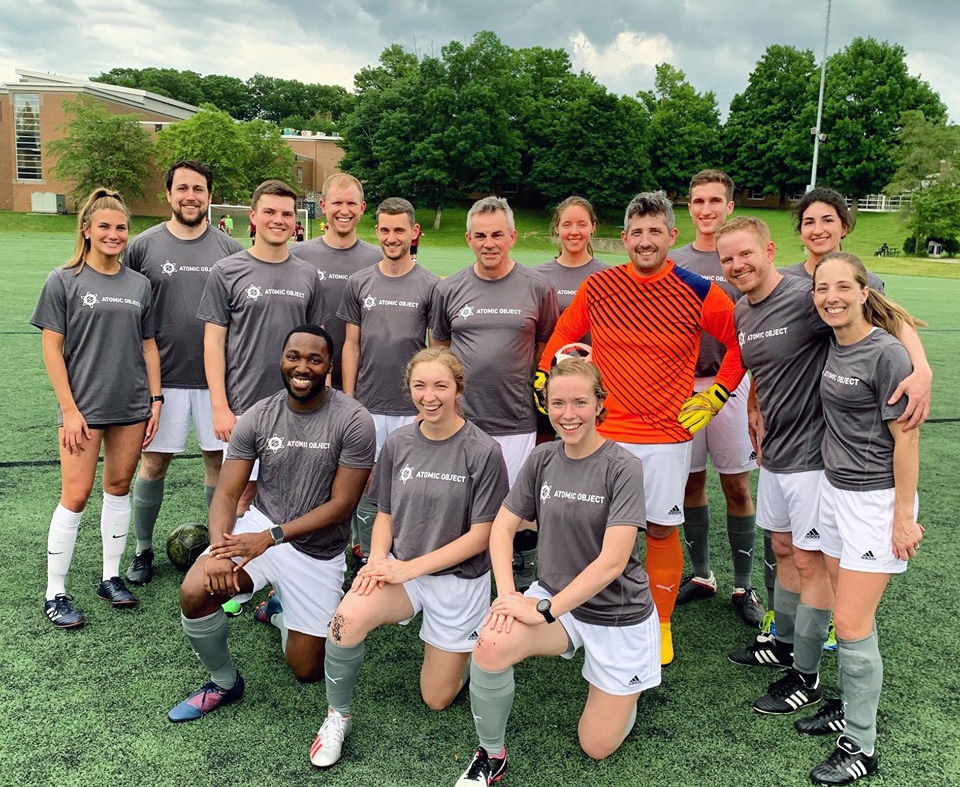 This summer, there was enough interest at Atomic for us to put together a soccer team to play in a local summer league. It was fun (we even had non-players turn up to support), helped bond us together as colleagues, and even provided some learning opportunities that could be used at work.

The team was a total mix of ability, experience, fitness, and age. Knowing this, how would we organize the team? We made up a “spine” of experienced players: two at the back to keep the team solid, one in the midfield, and one as a forward.

With this setup, there were experienced players spread throughout the team to help guide the novice players through the game. We also organized a team meeting before our first game so people had an idea about what position they were playing, what calls to expect, and what the rules were, and we gave them a chance to ask any questions.

This extracurricular activity was similar to setting up a project team—working out the blend of experience, how to help people work together, which areas people would work on, what project terminology to use, etc.

A soccer pitch should not be a quiet place; there should be a lot of talking between players. For example, a defender might need some help from a midfielder if they have too many players to mark, a midfielder should let a forward know that someone is coming in to tackle them, a good pass or tackle should get some praise…

There should also be a lot of talking on a project. Then if someone needs help with their code or fixing a bug, it’s close at hand. If a bug is caught before being released, the finder should get some praise. And team members can freely give and take advice on ways to work better.

“Man On! Time. Go Ball.” These are all words that meant something to me but maybe not to the other players. Add in some extra confusion of using words I was familiar with from playing in England ( I’m an ex-pat Brit), and there was a lot of potential confusion that could happen out on the pitch. So we had a quick team meeting to go over common words and commands that would be used during the game, what players should do when they heard them, and when to use them.

Similarly, on a project, it’s important to make sure the team is familiar with the terminology being used. This may include technical terms, as well as the language of the project’s business domain.

Some of the inexperienced players on our team wanted to improve their skills, so we organized some practice sessions in between games to work on the basics of ball control, tackling, and defensive shape.

Similarly, on a project, some people may not be familiar with the tooling you are using, the project lifecycle, the framework, etc. Help them get familiar with the basics so they gain confidence in what they are doing.

We started off our soccer season with some heavy losses, but as we got used to playing together and added in some practice sessions, we were able to give teams a good game and even managed to tie a couple of games.

Similarly, the initial stages of a project can also be hard. Team members might have to get used to working with each other and learn the new domain, tooling, and frameworks before getting into a rhythm where they can reliably produce good quality work. Learning to get through the initial stages is a useful skill, especially in a consultancy where there can be a lot of project switching.

The season was fun, so we decided to enter into the indoor league for the fall and winter. We’re playing an indoor six-a-side style, so we’ll need to pick up a few different skills, but the learnings from this season will put us into a good position.

What learnings from your outside activities have been useful at your work?