I was a sophomore in college before I learned how computer code works and got my first taste of HTML. By then I’d already chosen a career, formed a lot of misconceptions about what software makers do, and been told by a well-meaning developer cousin that developers were a strange lot (true) and I wouldn’t enjoy hanging out with them all day (definitely not true).

Unfortunately, this kind of ignorance and misconception about software development is very common. High school students are expected to solve algebra equations and read plays in 400-year-old archaic English, but they aren’t even taught to the basics of computer language. Why is this a problem? Because there’s a growing demand for software makers, and the world is full of kids who would love working in software — if only they knew it was a possibility.

That’s why Atomic was really excited when we heard about the Hour of Code, a campaign to introduce 15 million students to computer programming during Computer Science Education Week, December 9-15, 2013. Hour of Code included videos, activities, and tutorials that students can do online or without a computer.

My Friend, the Computer

Atomic Object invited students from the Creative Youth Center, Grand Rapids Montessori School, and West Michigan Center for Arts and Technology to each come for an Hour of Code at our Grand Rapids office. Because we didn’t have a computer for each student, we adapted an exercise from Thinkersmith called My Robotic Friends.

The challenge was to get someone to build a stack of cups like the one shown to the right, without giving them a picture or any verbal instructions. Instead, the students wrote “code” for their team mates to follow, using just these five symbols:

The students broke into groups of three. One would leave the room and the other two would write the code. Then the missing team mate would return and run the program. If there were mistakes, the two programmers would debug the code, and the “robot” would run it again. 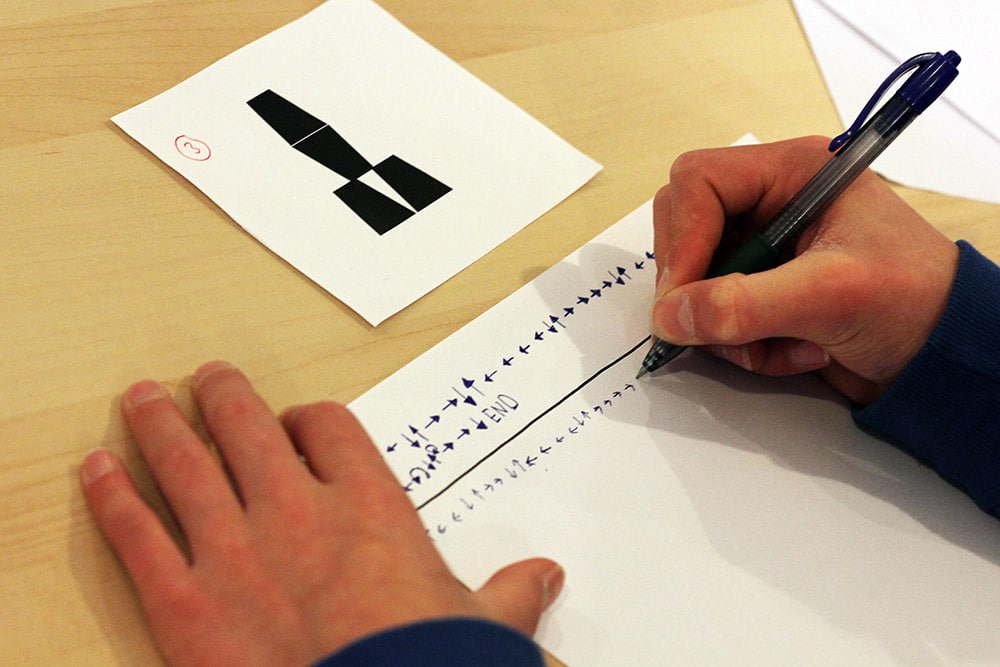 After each student got a chance to be the computer, we all worked together on a great tutorial from Code.org that let students write simple programs involving Angry Birds characters and marauding zombies. The students really enjoyed it, and we even started including more-complex concepts like functions and if-then statements.

We ended the hour with a tour of our office and a quick talk featuring a few examples of cool projects that Atomic designers and developers get to work on.

I don’t know if we changed anybody’s career plans today, but who knows? Maybe we planted a seed in one of these kids, or maybe they’ll give the idea to a friend or sibling.

At the very least, we’ve given them one more option. They now know that “computer code” isn’t some strange magic they’ll never be able to understand, and they know that the software field is full of men and women who look nothing like the hacker stereotype they see in the movies. I definitely consider that a success.

If you know someone who might enjoy coding, point them to Code.org, which is full of information and fun, free tutorials. You can make animated cards, create a quiz game, and even create an Android app you can download and run on your phone.