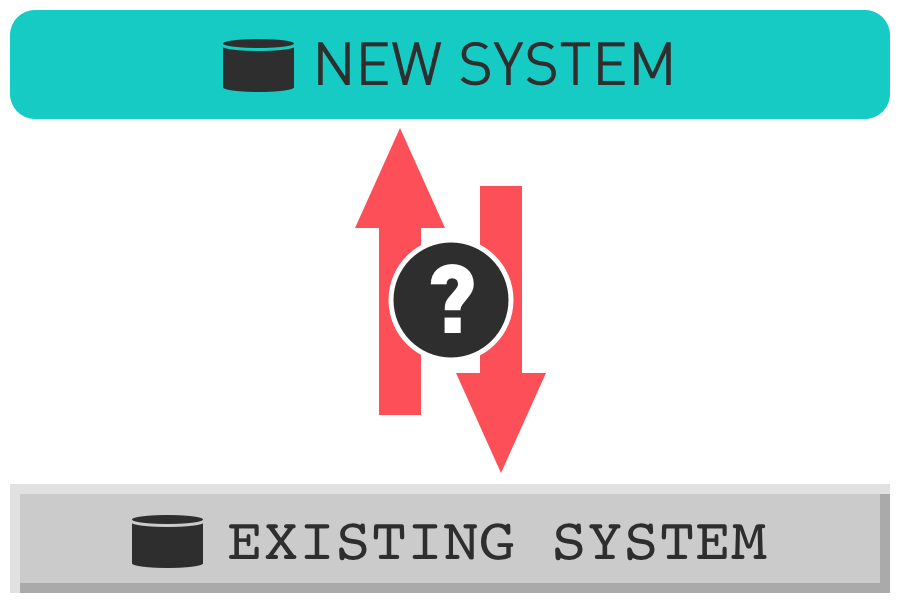 This is the third in a three-part series about strategies for synchronizing data between systems during a software replacement project. You can read about one-way integration and two-way integration if you want to catch up.

As a quick recap, I’m using the following shorthand as a way to talk about scope in this series:

Viable Releasable Increment (VRI) – The set of features that could be released together in order to satisfy the needs of users and the selected data integration strategy.

It’s nice when you can get away with no integration. It removes one more thing that the development team has to keep in mind. We’ve done this successfully when boundaries existed (e.g., sports seasons with defined beginnings and endings), restrictions prevented integration, or it worked for our customer. But even in some of those situations where we were successful, I think a solution that involved integration could have provided value more quickly and helped reduce risk.

I view “no integration” as a last option to consider if there is a hard blocker or other options clearly don’t make sense. In large projects, the risks simply get too high to take on a big-bang release.

When to use it

With this method, you allow editing in both systems and don’t attempt to synchronize the data. Users will make updates in both places and keep them in sync.

When to use it

Remember, you don’t have to apply the same strategy across an entire project or product. Use what makes sense to meet the team’s goals for a particular area of the application. For example, on a recent project, we used a combination of one-way batch, one-way event-driven, and two-way event-driven integrations to enable production use of the application while we continued work.

In summary, each of the three categories of approaches can be used effectively when replacing software systems:

The strategies I listed are some of the options I’ve considered over the years, but there are a lot of gray areas between those options that could also work. And I’m sure there are other creative solutions that aren’t on my list.

This is part one of a three-part series on Strategies for Data Synchronization for Rewrite Projects: