Recently, I started to customize my Git configuration to fit my workflow. I’ve found a few configurations that should be the default for anyone who installs Git:

I’ve had these in place for the past few months, and I’d encourage you to apply them right now. However, in case you need to see the benefits before blindly trusting me, I’ll give a quick overview of how each configuration has helped my workflow.

This configuration will make pull commands rebase instead of merge:

This configuration switches that behavior to the rebasing strategy. With rebasing, new commits will be created for the changes on your local branch that start after the changes on the remote branch. To learn more, I’d suggest Git Merging vs. Rebasing: The Beginner’s Guide.

Working with a pair? Rebasing when pulling makes the branch history cleaner. And you can avoid merge commits when pulling in your pair’s work from remote to your local branch.

This configuration will automatically clean Git objects in your repository locally whenever you fetch changes from remote.

Having this option enabled minimizes the number of branches I have on my local machine. Any autocomplete feature that uses this list of branches is much easier to use with limited branches hanging around.

This configuration adds extra colors when running git diff to show blocks of lines that remain unchanged but have moved in the file.

By default, the diff expresses the changes as additions and deletions, with green and red denoting the operation done to a line. The additional colors help differentiate actual changes and lines moving around due to those changes.

Here’s an example of a diff created by moving a block of code in a file: 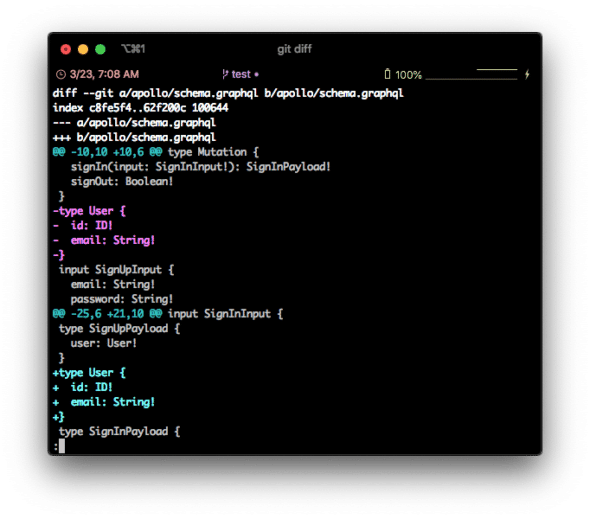 Since turning on this configuration, I’ve found diffs much easier to read. I’m able to focus on the lines of code that actually changed and brush over blocks of code that are just moving around. Diffs are much more meaningful when I have a way to focus on what really changes.

I could spend more time trying out different configurations, but these have served me well so far. I would highly recommend them to anyone using Git.

Are there any Git configurations you’d recommend? Leave a comment below, and I’ll check them out!