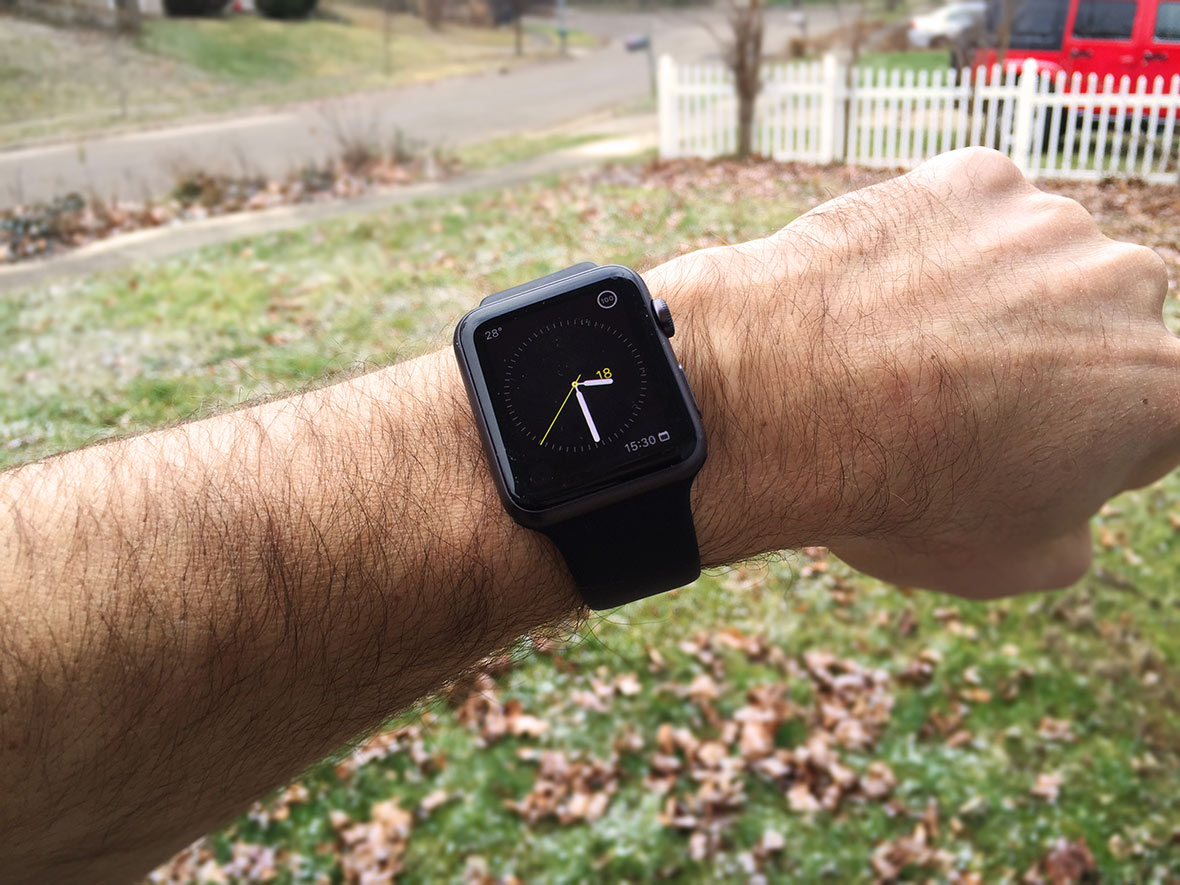 When Tim Cook announced the Apple Watch earlier this year, he pitched it as: “a watch, a new way to connect with each other, and a comprehensive health and fitness companion.”

As a software designer who’s been using this watch for six months, I’ve formed some opinions about how successfully these claims have been met and how immense the potential is for this device to set a new paradigm in our lives and work.

I have to confess that I haven’t been a watch-wearer for more than two decades. I can see their utility and beauty as purposeful, designed objects. But as a matter of personal preference, I don’t wear jewelry and don’t like to feel things hanging on my hands and wrists. Accordingly, I held off buying an Apple Watch for a few months because I did not think I’d like wearing any watch, regardless of how well it was designed.

Apple Watch is the first Apple device since the late 90s that I didn’t line up to buy on launch day. But eventually, my curiosity about this new software platform got the best of me, and I broke down and bought one. I was surprised by how comfortable the standard sport band is and how little I noticed it on my wrist. As a piece of industrial design, Apple Watch is probably the best-designed product I’ve owned since the original iPhone.

As many others have indicated, I really appreciated the degree to which the Watch relegated my iPhone to my pocket. I no longer have a reason to pull out my phone to check the time. I don’t know about you, but I prefer to show people that I’m present and paying attention no matter what context I am physically present in. The disruptive act of pulling out my phone sends the opposite of that message, but Apple Watch allows me to check the time or receive a notification in a way that is natural and mostly unnoticed.

I appreciate the subtle way Apple calibrated the screen to turn on when I raise my wrist. It isn’t perfect, but I’d say that eight out of ten times, it turns on exactly when I want it to. Apple will almost certainly iterate on this and get closer to 100% in further releases of Watch OS.

Conclusion: As a watch, Apple Watch outperforms what I had anticipated.

“A New Way to Connect with Each Other”

I have to confess that, beyond notifications, I haven’t found the Watch to be anywhere near revolutionary in the way it impacts my connection to other human beings. The ubiquitous nature of notifications on Apple Watch may have even pushed me toward not wanting to be digitally connected with anyone.

To be frank, I don’t want to know immediately when a friend has texted me or liked one of my Instagram posts. The new modes of communication such as sketching out a message to a loved one or transmitting a heartbeat don’t seem sweet or sentimental to me. They seem downright creepy. I wouldn’t be surprised if usage of these features is close to nonexistent. And although it works flawlessly in my experience, using Siri to dictate messages or make phone calls is something I just won’t do.

Conclusion: For individuals who want to be connected to a very high degree, Apple Watch will be exactly what they are looking for. However, I am at a point in life where I crave connection with actual people in time and space rather than through the lens of a digital device. In my experience, Apple Watch has failed to help me in that quest. But, to be fair, I don’t think any electronic device is going to help me with that any more than a standard flip phone would.

“A Comprehensive Health and Fitness Tracker”

One of the functions I was most excited about was the fitness tracker. I’ve used my iPhone as a fitness tracker since the first Nike Plus app was released in 2010. Before that, I used an iPod with Nike’s add-on technology to do the same thing.

During that time, I’ve logged over 2,000 miles running. But I engage in other activities aside from running that earlier fitness trackers don’t count as exercise. What I’d wanted for years was a watch or wristband that would track my pulse as a major indicator of exercise. There’s a big fitness difference between walking, jogging, or flat-out running for a mile. Obviously, velocity could help to differentiate between those gaits. But nothing measures exercise better than heart rate. When I heard that Apple Watch measured heart rate very closely to the industry-leading Mio Alpha chest strap, I was sold.

Conclusion: Unfortunately, my actual experience of using Apple Watch as a fitness tracker has been less than stellar—but not because of hardware. I have found the watch itself to be accurate and relatively autonomous from iPhone as a fitness tracker. However, Apple’s fitness tracking software on the Watch is just not up to the task of tracking exercise for someone who is more than moderately serious about physical activity.

For your average “Couch to 5K” user, it’s probably great. It reminds you to get up, it helps you set fitness goals for yourself, and it gives you feedback and a visible way to track your success. But for someone who wants to know what his heart rate was when he was running seven-minute miles at mile seven of a ten-mile run? Apple’s fitness tracking software is a colossal fail.

It’s frustrating that the current iteration of software captures the data but doesn’t give the user that level of visibility. It’s also frustrating that the ability to set advanced in-workout goals for yourself should be possible, but it isn’t there. It would be great if I could set myself a desired pace for each mile of a run and then receive a tap on the wrist if I fall below that pace. The device is made for this type of in-workout notification, but it’s frustratingly under-utilized.

I don’t want to sound like I’m being too hard on Apple Watch. I do believe that the device itself has some truly revolutionary potential. But we aren’t there yet, not by a long shot. And, as has been the case with the iPhone and iPad, I don’t think Apple is going to be the one to fulfill the potential of this device. That has been and will be up to independent companies with disruptive vision who have an innovative understanding of what technology can do for humans.

Imagine the Apple Watch in the manufacturing space. Currently, it’s common to monitor and communicate process, order, and performance using enormous pieces of machinery with archaic software and UI. It would be so easy for the entirety of this system to be replaced by a fleet of Apple Watches communicating with employees through a series of infinitely expandable taps and dings. The entire manufacturing process would instantly become more nimble and flexible. It would also, surprisingly, be much more affordable than the status quo. Such a move could literally lead to a renaissance in American manufacturing.

Imagine the possibilities Apple Watch offers to the treatment of chronic conditions. Many (but by no means all) chronic conditions are the result of bad lifestyle choices that turn into habits. With all the tracking, analysis, and notifications the Apple Watch can do, it seems like an ideally placed device to help patients and caregivers alike enhance treatment. I’ve already experienced Apple Watch’s ability to change my work habits by reminding me to stand every hour. Imagine if it were reminding me to do more meaningful things that directly affected a chronic condition while recording my compliance for a caregiver to monitor.

Imagine the power of the Apple Watch for caregivers of senior citizens. What sorts of things do these professionals want to track to make sure those in their care are in satisfactory condition? They want to know that their patients are not in a cardiac emergency. Apple Watch has them covered. They want to know what sort of sleep patterns their patients are experiencing. Apple Watch–check. And it’s an unfortunately reality that many senior patients need their location tracked. Again, Apple Watch can fulfill this need.

In 2011, Marc Andreessen wrote in The Wall Street Journal that “software is eating the world.” He was referring to the fact that software is an enormous growth market, rather than a tech bubble waiting to pop. It’s in my best interest to believe this is true, so I can’t say that I’m capable of offering an unbiased opinion.

I believe Apple Watch is a revolutionary device because it’s bringing that software onto a more personal level than ever before. It also offers new paradigms in interaction design that will only serve to enrich experiences and empower users to do amazing things. The possibilities are truly endless.

Do you have a project that involves wearable devices and custom software? If you do, we’d love to talk. Let’s make the future together.